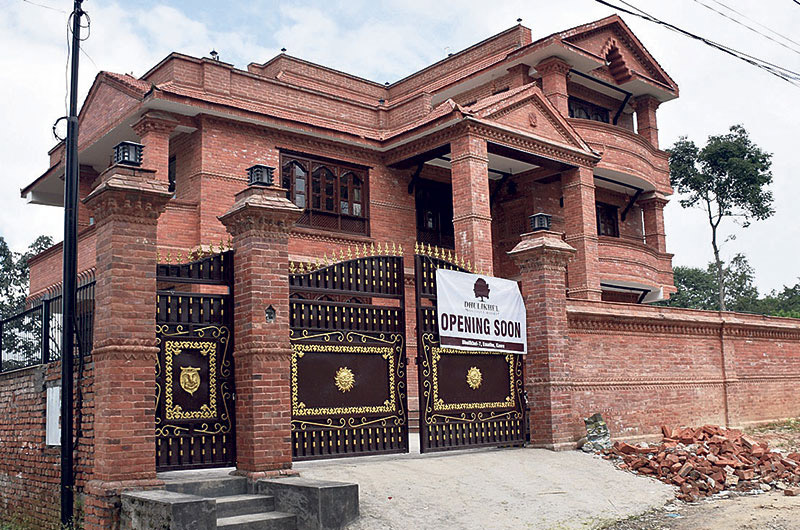 Until few years ago, only the local people were investing in hotels and resorts. But, with the increase in tourist arrivals, investors from other parts of the countries are also attracted toward this small town. Even non-resident Nepalis (NRNs) have started putting their money into Dhulikhel’s hospitality industry. TBi Group, a company promoted by NRN Bhawan Bhatta, is the first company not promoted by Dhulikhel locals to invest in Dhulikhel’s hospitality industry.

Nirajan Jangam, chairperson of Ward No. 8 Office of Dhulikhel Municipality, said that investment in Dhulikhel’s hospitality industry is on the rise for the past one year. “Currently, there are 27 hotels and resorts, including the under-construction ones, in our ward. These resorts are charging US$ 5 to as high as US$ 2,500 per night,” he added.

According to Jangam, investors are mainly attracted toward Gaukhureshwar, Bhatti Danda and Maanegoth area in his ward. “The area is pristine and full of greenery. One on side there is a road that acts as an alternative to the BP Highway, while on the other there is a hiking route to Namobuddha,” he added.

Among under-construction resort, Hotel Sarathi, which is spread over 12 ropani of land, is starting operation from January 1, 2018. It is being built with an investment of Rs 150 million. The hotel is promoted by a group of entrepreneurs who are operating Dhulikhel Training Center.

Similarly, a group led by Yekka Lama is opening Himalaya Heritage Hotel in Bhatti Danda. Likewise, Sojourn Himalaya, and Himalaya Sunrise Hotel are also coming into operation soon.
Dhulikhel is also getting a first boutique hotel in the near future. A group of entrepreneurs led by Sushil Byanju are building Dhulikhel Boutique Hotel. The luxurious property, which is being built with an investment of Rs 30 million, can accommodate 26 guests at a time.

Likewise, existing hotels are also expanding their capacity. Around 60 percent of guests served by these hotels are domestic tourists. Local entrepreneurs say ‘village trekking route’ that starts from Sankhu and passes through Lapsiphedi, Nagarkot, Dhulikhel and Namobuddha before ending at Balthali has helped to increase movement of tourists in Dhulikhel. Dhulikhel can accommodate 500 tourists per day.

“We need to bring more investment to accommodate more tourists. There is a need to bring at least five big hotels,” Prem Kantha Shrestha president of Regional Hotel Association of Nepal, Dhulikhel, said.

“As Dhulikhel Municipality has announced to bring tourism master plan and create investment-friendly environment in Dhulikhel, investors are attracted toward this hill station.”